In 1997- he opened "Barker's Tang Soo Do" in Brownstown and in 2000- changed the name to Progressive Tactics Martial Arts. The school has been a part of the Brownstown Community since 1997 and has supported the community not only by offering top quality martial arts- but through community service. From various fund raisers for local citizens, police organizations like DARE and GREAT, to the "Adopt a Highway" program- Progressive Tactics can be seen through out the town! 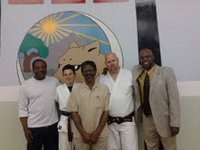 In May, 2012, Shihan Bobby Peeler and people mentioned above- came together to recognize Mr. Barker as the rank of 6th degree black belt.

We are all each others instructors

We at PTMA are successful because of the many talented and wise instructors we learn from as well as the many white belts and students who come through our door. We can and do learn from all.